Fatty liver disease may not receive the widespread attention of larger scale health problems like heart disease and cancer, but liver problems can be highly dangerous and very difficult to pick up on in their early stages if you don’t know what to look for.

While much liver disease is related to alcohol and drug abuse, in many cases there is a strong genetic factor combined with high cholesterol levels and obesity – in other words, it’s often a combination of genetics and diet.

This page will delve into how to pick up on the early warning signs of fatty liver disease, treatments and diets for the disease, how alcohol and liver disease go hand in hand and how the liver can regenerate itself.

Just read on and learn more.

What Is Fatty Liver Disease? – Well, It Starts with too Much Fat 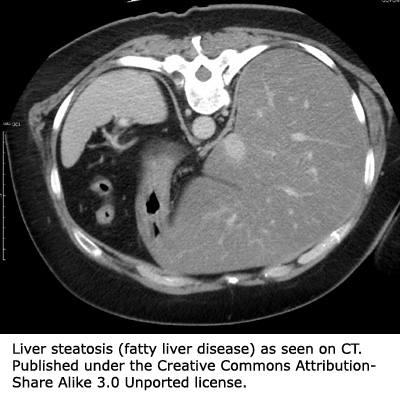 As you have probably guessed from the name, fatty liver disease is a condition in which the fat content of your liver grows to an unsafe level.

It is normal for your liver to contain a small amount of fat – just as all your vital organs require fat to function normally (this is why even bodybuilders never get down to 0% body fat – you need that fat to stay alive!).

The problems start occurring when the percentage of your liver made up of fat moves beyond a particular threshold – the safe level can differ based on genetics, but generally if your liver’s fat content goes higher than 10% you are likely to experience some significant problems.

Bear in mind that a high fat content in the liver doesn’t constitute a disease in itself. The disease develops when this excess fat content starts triggering problems such as liver inflammation.

Let’s now look at the symptoms of fatty liver disease so you know what to watch out for.

As mentioned, a fatty liver in and of itself is often not particularly problematic – as a result, many people don’t even know they have fatty liver.

It’s the more serious conditions which fatty liver can lead to which are the biggest cause for concern.

This can make catching fatty liver in its early stage troublesome, because the disease itself doesn’t display significant symptoms in most cases.

Liver problems are only noticeable once the damage has reached a more advanced stage.

Watch out for Steatohapatitis – When the Liver Fat Triggers Inflammation 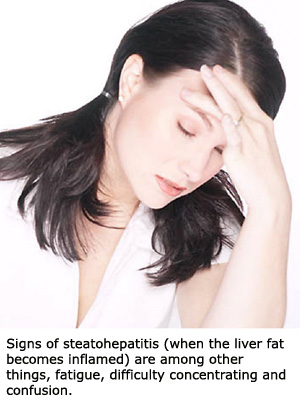 The most common concern is steatohepatitis – when the liver’s fat content triggers inflammation, at which point the signs that something is wrong begin to manifest themselves, often in the form of:

Another major concern is liver cirrhosis, which we will discuss towards the end of this article – but for now let’s look at the differences between fatty liver disease caused by alcohol and the non-alcoholic version of the illness.

While heavy drinkers often tend to be in denial about the extent of their problems and may even tend to ignore physical symptoms rather than face them head on, the medical statistics are fairly shocking when it comes to alcohol consumption and fatty liver disease. 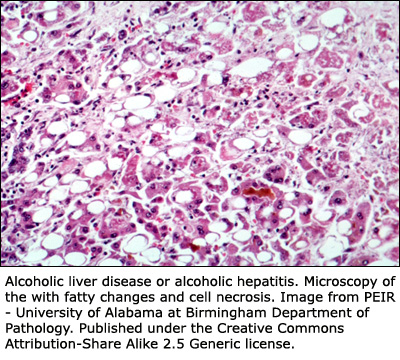 Almost all heavy drinkers develop fatty liver disease over the long run if they don’t reign in their drinking, and a high percentage (about 20%) of chronic drinkers will also develop more severe liver-related conditions like cirrhosis.

However, research has shown that in drinkers who consume over 60 grams of alcohol on a daily basis, over the long run the development of fatty liver is virtually guaranteed.

Although the incidence of liver disease in alcoholics is extremely high, it is still non-alcoholic fatty liver disease which is more common in the United States and other developed countries today, largely as a result of high-cholesterol, high-saturated-fat diets.

The Good News about an Alcoholic Fatty Liver

Although alcoholic and non-alcoholic fatty liver disease share similar names, they are actually quite different in terms of the bodily processes involved.

Alcohol itself actually directly causes an inflammatory reaction. On the positive side, alcoholic fatty liver is a condition that can be reversed if it’s caught early enough.

So far we’ve focused on diet and alcohol as causes of fatty liver disease, and while these two factors (combined with genetics) are the biggest causes of the disease, there are others which should also be taken into consideration. 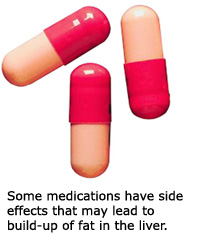 Some medications, for example, have unfortunate side effects.

These side effects can affect the liver’s metabolism functions and consequently lead to a build-up of fat in the liver.

Drugs other than alcohol can also damage liver function and cause a build-up of fat in the organ.

Sometimes, liver disease is simply hereditary – it comes from a person’s genetics and their lifestyle choices have little to do with it.

3) Poor Diets: Eating too much of the Wrong Stuff OR too Little of the Good Stuff

There is also another way in which diet can lead to fatty liver disease.

Not only does a high-cholesterol, high-fat diet put you at greater risk, but there are also risks at the opposite end of the spectrum: not eating enough. Eating disorders, malnutrition and attempts at rapid weight loss can contribute to the development of liver problems.

Also, as a final note it’s worth remembering that it is not necessarily diet itself which causes fatty liver disease.

Often it is other diet-related problems such as Type II diabetes and overweight, obesity.

In other words, two people can eat similar diets, but if one is overweight or even obese and the other is at a healthy weight, the obese person is likely to be at higher risk of developing liver disease.

And again, this is the case even if their fat and cholesterol intakes are similar. Unfair, but true

Fatty Liver Disease Treatments: Cut the Alcohol (if You Drink), Change Your Diet and Possibly Get Some Medication 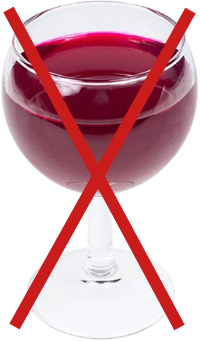 The treatment which your doctor will recommend will first of all be based on whether you’re suffering from alcoholic or non-alcoholic fatty liver disease.

In the case of alcoholic liver disease, the first step is usually a complete cutting of alcohol from your diet. This is often a battle for people who have a strong addiction to drinking, even though they know continued indulgence in drink can cause them severe long term harm.

Treatments typically revolve around dietary changes, medication, and increases in antioxidant intake, or some combination thereof.

Now that you’re aware of the major causes of fatty liver disease in most cases, you can probably take some accurate guesses at the best foods to include (and exclude) when putting together a fatty liver diet.

Obviously, cutting alcohol altogether is a great idea – even if you’re not suffering from alcoholic fatty liver. Controlling cholesterol is also a big plus, by ensuring a healthy level of ‘good’ cholesterol while restricting your ‘bad’ cholesterol intake as much as possible.

Obviously, however, risk factors such as diabetes can’t be kept in check by diet alone.

Fatty liver disease is complex, and depending on how advanced your liver problems are you may be at a point where medication is necessary.

No Standard Medicine: Liver Medicine Depends on the Cause of the Fatty Liver

The medication prescribed for you by your doctor will vary depending on exactly what your biggest risk factors are.

For example, if high cholesterol is an issue you may be prescribed medication for lowering triglyceride levels.

Because of the complex nature of fatty liver and the wide variety of causes, there is no standard ‘go-to medicine’ for doctors. Your treatment will be based on your individual requirements after a thorough assessment of the causes of the problem in your own situation.

The Liver Repairs Itself BUT … only Under the Right Conditions

As mentioned previously, the liver actually regenerates itself under the right conditions which is great news.

However, this knowledge has been used by many alcoholics to justified continued excess drinking, so we need to clarify what those ‘right conditions’ are.

Fat build-up in the liver occurs, generally speaking, because the metabolic functions the liver normally serve become overwhelmed – in simple terms, the ‘input’ coming into the liver (in the form of alcohol, for example) is greater than the liver’s maximum processing capacity.

In order to repair itself, this ‘input’ needs to be dropped to a level the liver can manage – the liver will then be able to continue with its normal metabolic functions until the system has been ‘cleaned out.’

Now, it’s very important to follow up these notes on liver repair and regeneration by touching on liver cirrhosis.

Many heavy drinkers and poor dieters rely on a vague understanding that their liver can ‘heal itself.’

While this is true to a certain extent, there is a limit – when damaged liver cells can’t repair and become replaced by scar tissue.

This tissue is unable to regenerate itself, and as a result leads to permanently impaired liver function.

The process of healthy liver cells being replaced with scar tissue is called liver cirrhosis.

Keys to a Liver Detox Diet and Healthy Liver Diet

Guide to a Healthy Liver Diet: Make Your Own Liver Cleansing Diet

Your Guide to a Powerful Liver Cleanse Diet: Choose the Right Kinds of Fiber, Protein, Vegetables, Fruits and Fats in Your Healthy Liver Diet

The Research-Based Liver Flush Guide: Beyond the Myths of Radical Detox Methods

Where is Your Liver Located, What is the Function of the Liver, and Other Liver Information

Fatty Liver Diet Supplements, Herbs and Foods along with Insights into the Causes of Fatty Liver

Go to the top of this article about Fatty Liver Disease in Depth: Typical Signs and Symptoms, Alcoholic and Non-Alcoholic Causes and Dietary & Medicine Treatments

This website uses cookies to improve your experience while you navigate through the website. Out of these, the cookies that are categorized as necessary are stored on your browser as they are essential for the working of basic functionalities of the website. We also use third-party cookies that help us analyze and understand how you use this website. These cookies will be stored in your browser only with your consent. You also have the option to opt-out of these cookies. But opting out of some of these cookies may affect your browsing experience.
Necessary Always Enabled

Any cookies that may not be particularly necessary for the website to function and is used specifically to collect user personal data via analytics, ads, other embedded contents are termed as non-necessary cookies. It is mandatory to procure user consent prior to running these cookies on your website.